Cradle To The Rave 3

Let’s fast-forward a few years from my last “Cradle to the rave” post to April 11th 1998, the first Canadian AWOL event. 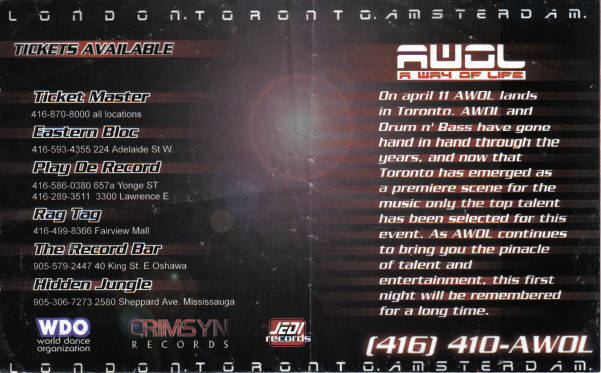 In case you don’t already know, AWOL is a very famous collective of Drum and Bass/Jungle legends consisting of:

AWOL is also a promotion group, mainly run by Mickey Finn and Darren Jay. People familiar with the early DnB/Jungle scene will always associate AWOL with a famous audiocassette tape. The tape seems to have the loudest crowd ever recorded on any rave tape I’ve ever heard. Some people think its a real crowd, some think they put mics over the crowd to amplify them, but many people also say they placed a fake crowd in the background of the tape. I had a conversation with Darren Jay about this and he said the tape was real though. Anyways..I don’t have the audio and can’t find it online but will post it if I do!

My friend Bowen drove a group of us to this rave, which was being held at the Docks (Sound Academy, 11 Polson). We were really pumped for the line up. Ellis Dee was a famous Dj that we hadn’t seen before. Shy FX and Fearless were already legends to us by this time. There was also a newer MC that we had been hearing on UK rave tapes called Skibadee, and we couldn’t wait to see him live.

This night was a little different for me as I was the only one with a fake ID and spent a few hours drinking at the bar. Right above the bar was the DJ booth, so I had a great view. The music was amazing that night and so was the vibe. I remember Shy FX dropping his track Bambatta that night. Wow! That track really had a strong influence on DnB. It was so simple but so different and amazing to party to.

Once the bar closed they opened the area up to everyone. Bowen came up and we started partying and chatting with a couple girls. This one girl I’d been chatting with I’d seen before at raves. She was super hot and we always bumped into each other at these parties. The group of us were partying and feeling good. Eventually Bowen started making out with one of the girls. He stopped and looked at me and the other girl and told us to kiss… So what do I do? I just remember moving in to kiss her and then bursting out laughing right in her face. Fuck I was an idiot! I don’t know why I did this but needless to say she wasn’t impressed with my reaction and took off. At the time I didn’t really care that much though because I had a girlfriend (oops). But I do remember thinking, damn, maybe this girl really wanted me? I thought she was totally out of my league. Oh well, back to raving!

We all had an amazing time that night at AWOL. We decided to leave around 8 a.m. When we walked out of the club the sun was shining and it was beautiful out. We started walking to Bowen’s car and BANG!  We hear a fucking massive explosion. We looked around and couldn’t see anything and were thinking did we just hear that? Eventually we got in the car and started heading home. We were driving for about two minutes and suddenly we saw what looked like a war zone. Smoke and shit was everywhere. I remember looking out the window and seeing massive chunks of concrete lying on the ground. What had happened? They demolished a building about 5mins before.  It was awesome.  What a proper way to end our first AWOL! 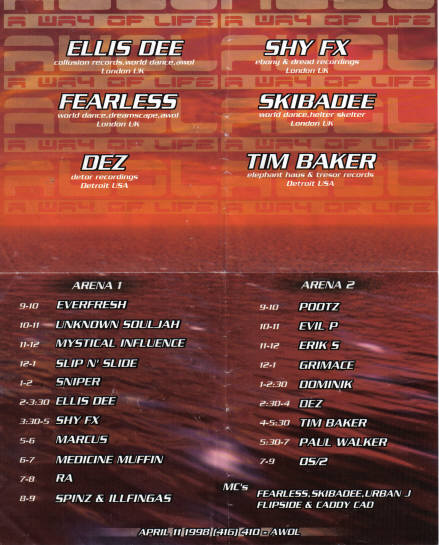